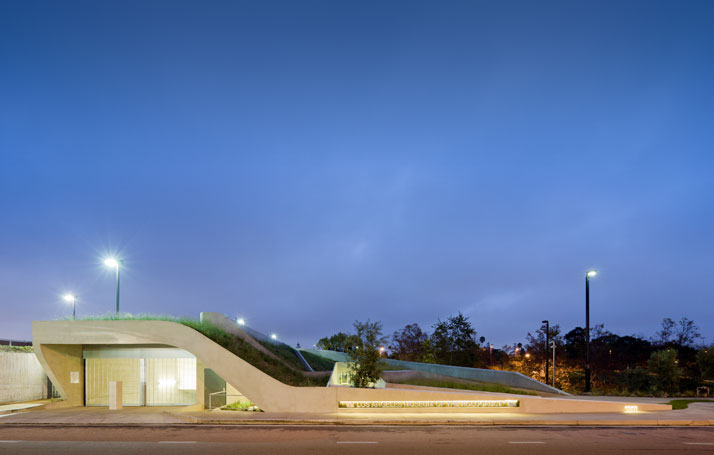 The new building for the Los Angeles Museum of the Holocaust (LAMOTH), designed by Belzberg Architects, is located within a public park, adjacent to existing Los Angeles Holocaust Memorial. Following is some information by the designer, “Paramount to the design strategy is the integration of the building into the surrounding open, park landscape. The museum is submerged into the ground allowing the park’s landscape to continue over the roof of the structure. Existing park pathways are used as connective elements to integrate the pedestrian flow of the park with the new circulation for museum visitors.The pathways are morphed onto the building and appropriated as surface patterning. The patterning continues above the museum’s galleries, further connecting the park’s landscape and pedestrian paths.

By maintaining the material pallet of the park and extending in onto the museum, the hues and texture of concrete and vegetation blend with the existing material pallet of Pan Pacific Park. These simple moves create a distinctive faade for the museum while maintaining the parks topography and landscape. The museum emerges from the landscape as a single, curving concrete wall that splits and carves into the ground to form the entry. Designed and constructed with sustainable systems and materials, the LAMOTH building is on track to receive a LEED Gold Certificate from the US Green Building Council. 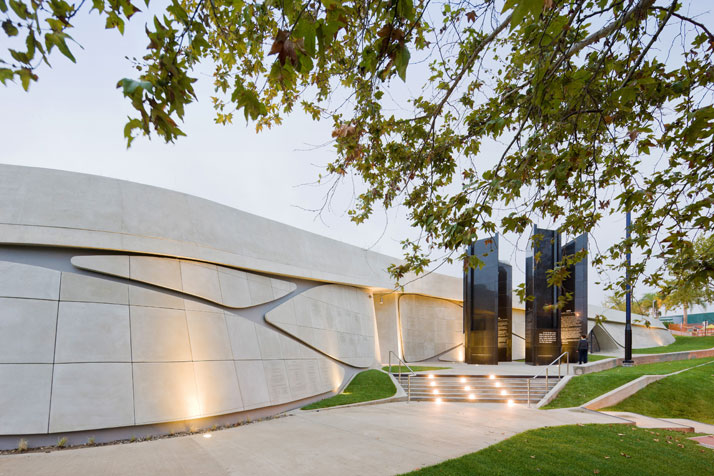 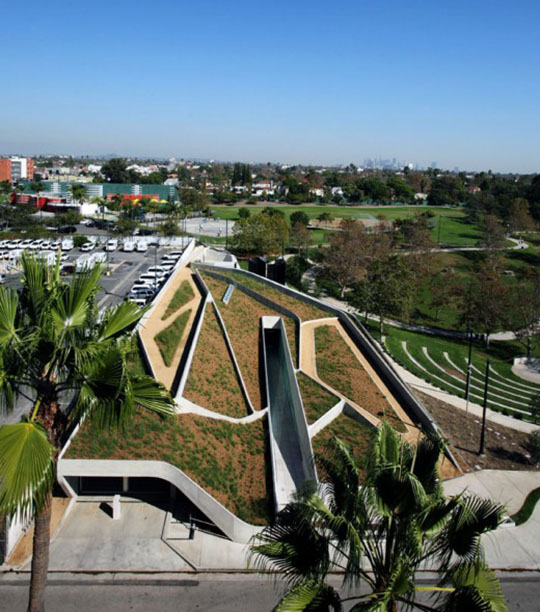 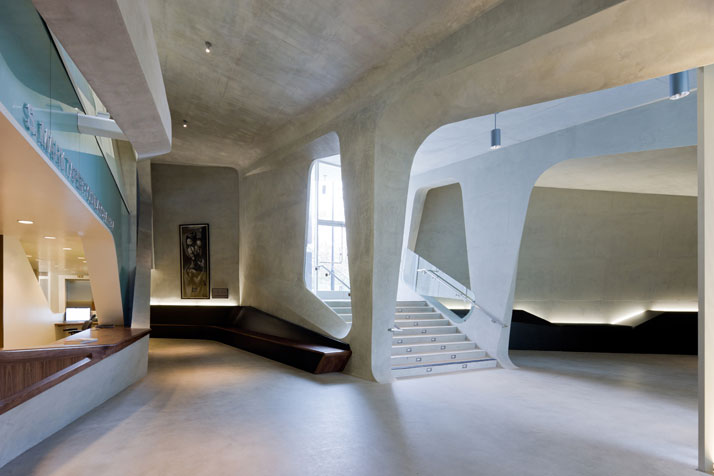 Patrons begin their procession at the drop off adjacent to the park. Their approach is pervaded by sounds and sights of laughter and sport of kids playing in the park and picnicking with their families. Because the building is partially submerged beneath the grassy, park landscape, entry to the building entails a gradual deterioration of this visual and auditory connection to the park while descending a long ramp. Upon entering, visitors experience the culmination of their transition from a playful and unrestrained, public park atmosphere to a series of isolated spaces saturated with photographic archival imagery. As part of the design strategy, this dichotomous relationship between building content and landscape context is emphasized to bolster the experience inside the museum and allegorically correlate the proximity with which German forest revelers enjoying public parks were to sites of horrific and inhumane acts being carried out in 1930’s and 40’s. Visitors exit the museum by ascending up to the level of the existing monument, regaining the visual and auditory connection with the park environs. 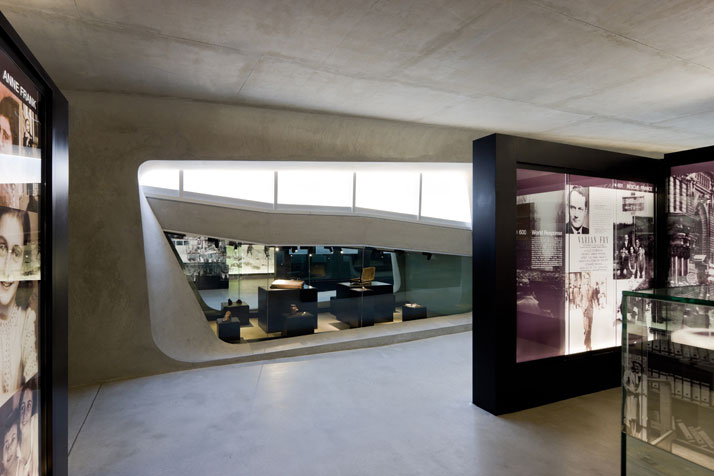 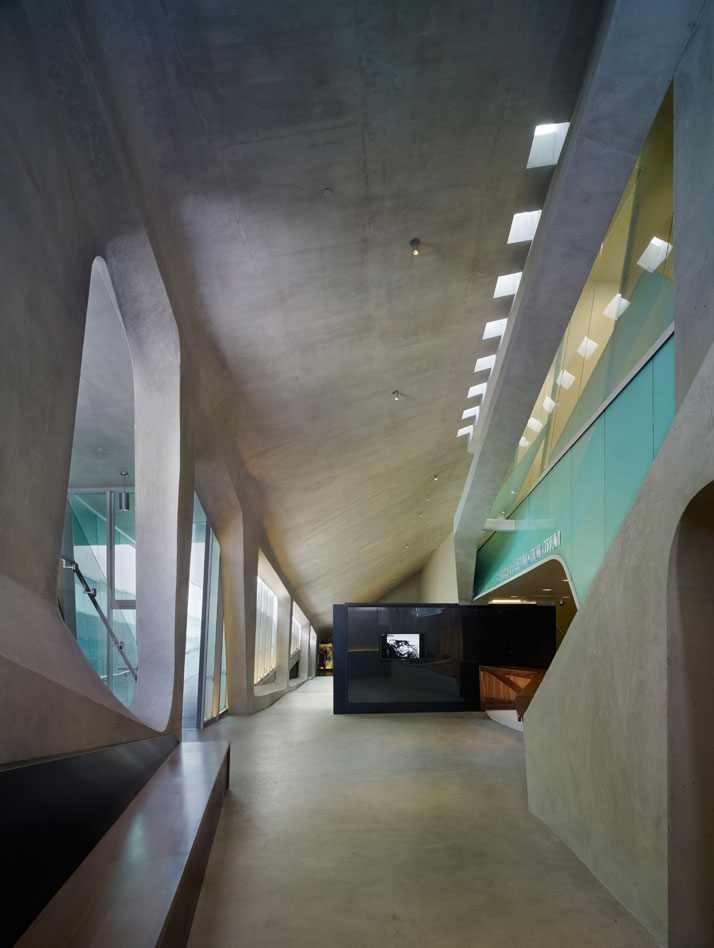 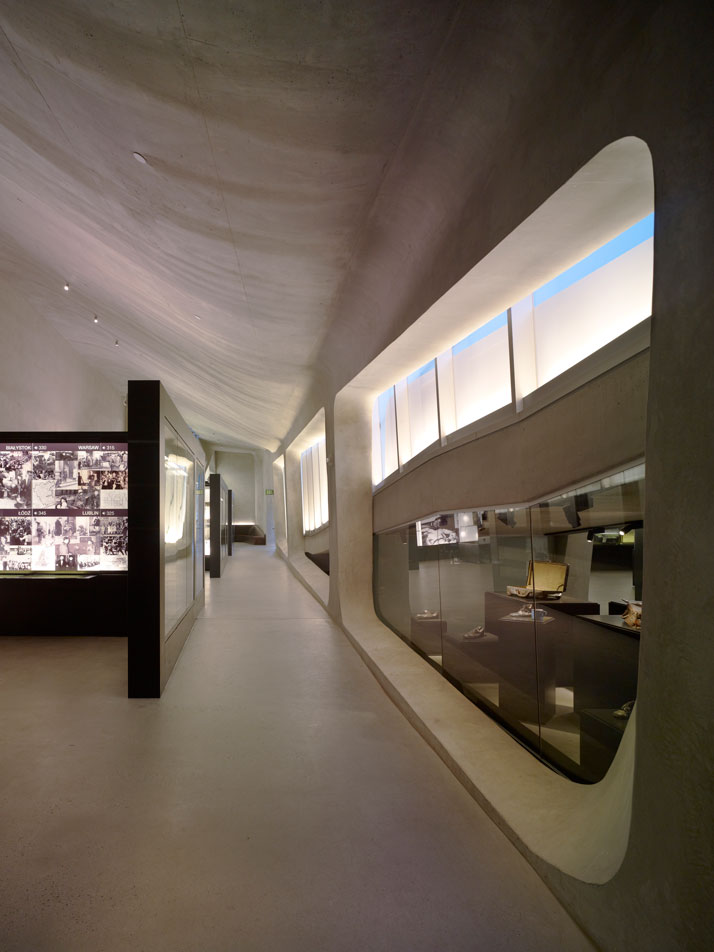 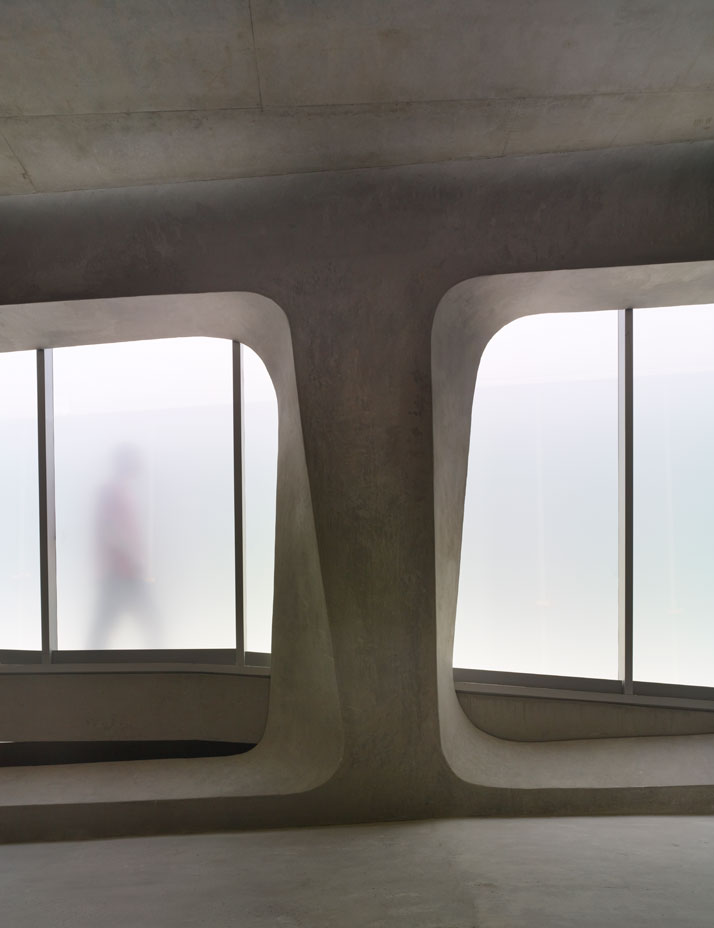 The first room is titles, “The World That Was”, and incorporates a large, single interactive table, mimicking a conceptual “community” or dinner table. The exhibit brings a large group of patrons together around one interactive exhibit. The lighting of the interior galleries dim as the visitor steps down into the subsequent rooms where two separate exhibits depicting “Kristallnacht” and a “Book Burning” display divide the singular crowd; diminishing the “community” provided by people nearby. Through the third room and into the fourth, the floor continues to step down as ambient lighting becomes scarcer leading individuals to the room titles, “Concentration Camps”. The ceiling is low, and the room is almost entirely illuminated by individual video monitors, about the size of a notebook, which limits viewing to a single spectator. The visitor is now confined to the most isolated, darkest and volumetrically concentrated underground area in the museum. The journey from this point forward in one of ascension and of finding the comfort of familiar space as floor levels begin to rise and natural lights begins to penetrate the interior once again. The ascent up to the existing monument is filled with sights and sounds of unrestricted park land.” 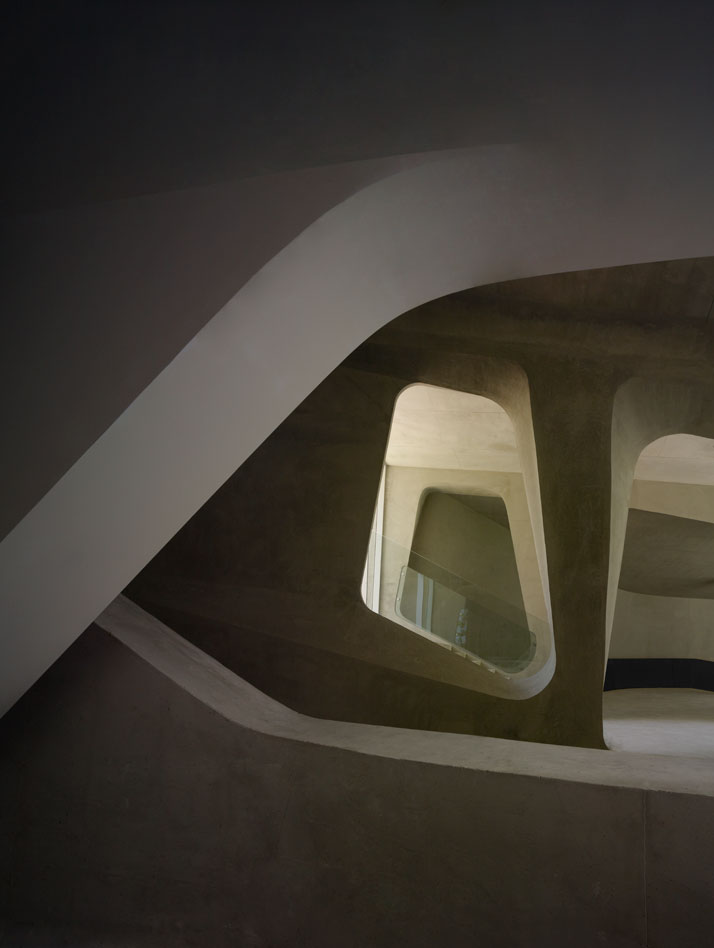 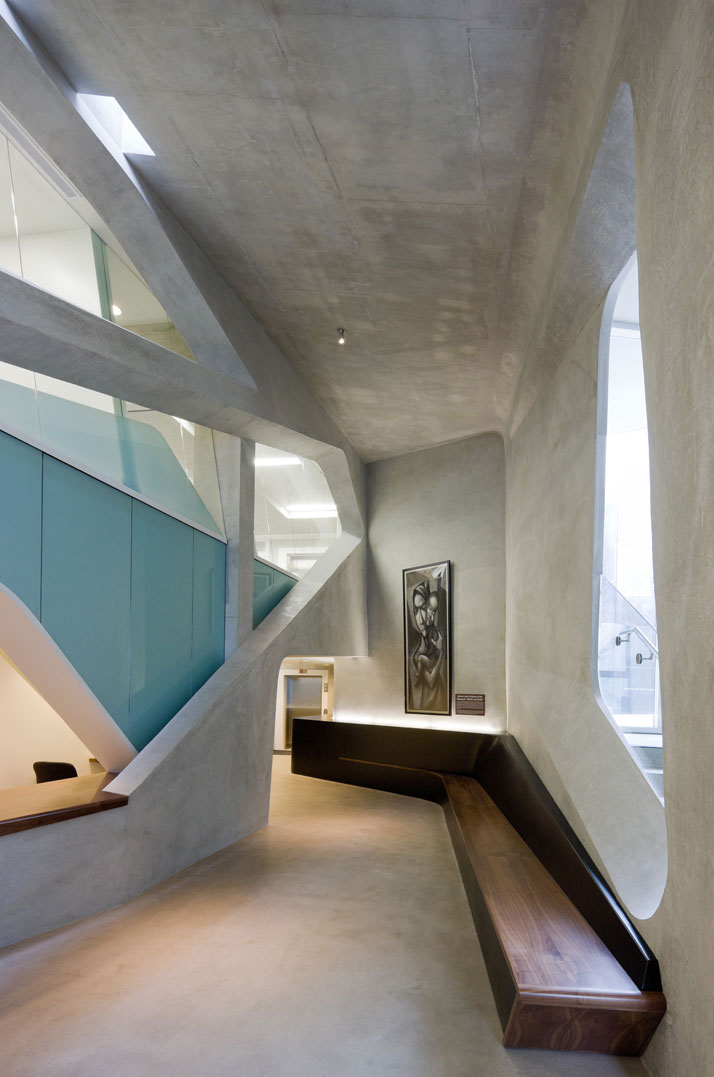 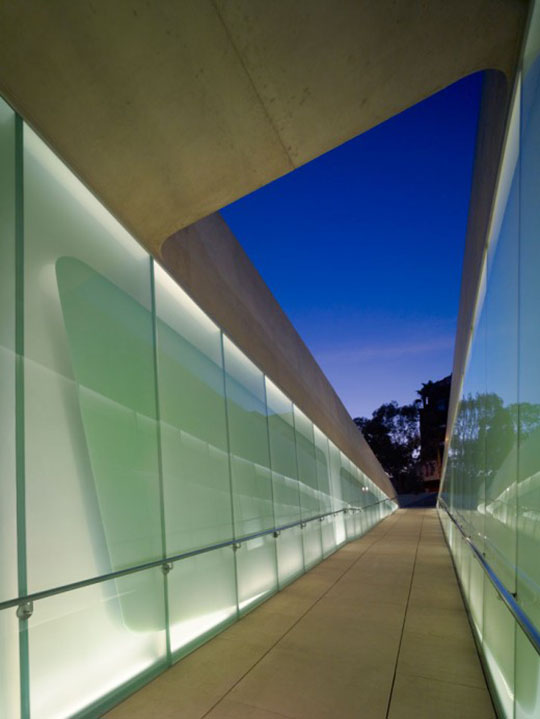 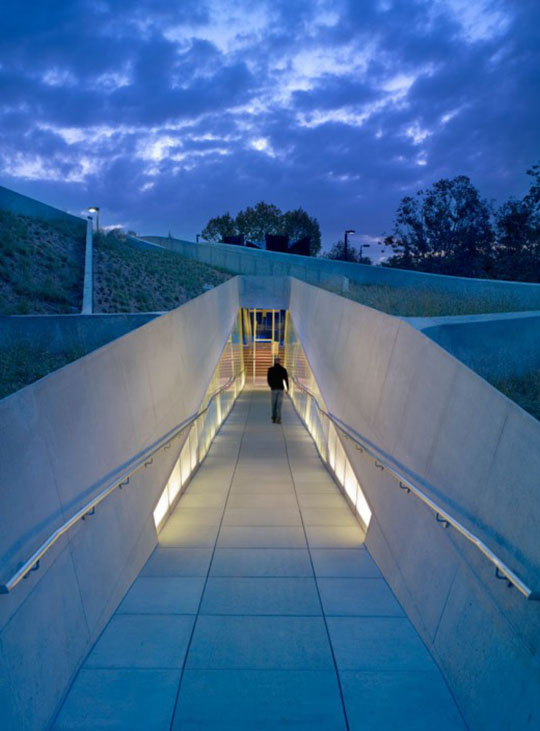