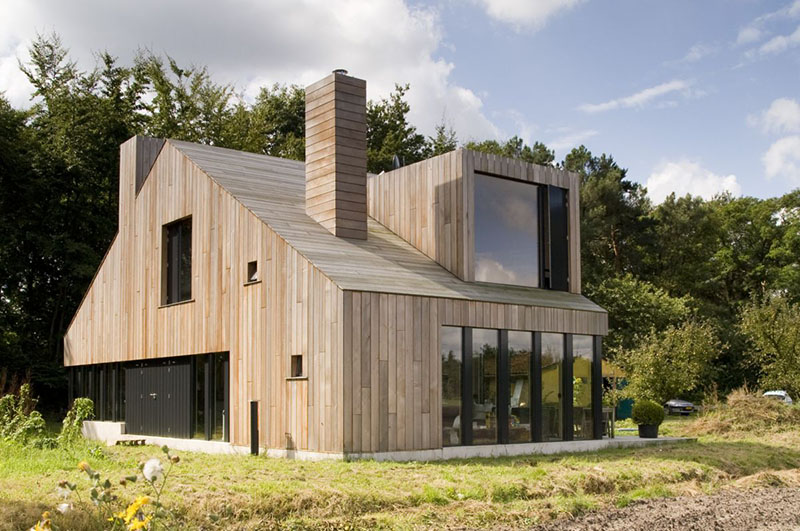 Dutch architectural firm Onix has designed the Chimney House in Bosschenhoofd, The Netherlands. Following is some information provided by the architects, “The Chimney House in Bosschenhoofd has a simple main volume with a rectangular floor plan and a saddleback roof. The plan is based on the fact that the chimney is a disappearing feature in architecture of this century. This tempted us to create a house with several chimneys. The chimney has been used in different sizes and shapes and with different functions.

In conjunction with the other premises on these grounds, the new house has a strategic position within the domain. The layout defines intimate spaces with varied identities. Of the existing buildings, only the old house remains intact to be used as a studio. The walls of the existing sheds will be dismantled so that only the roof remains, supported by columns. These roofs will be used as a carport and as a storage area for wood for the hearth. 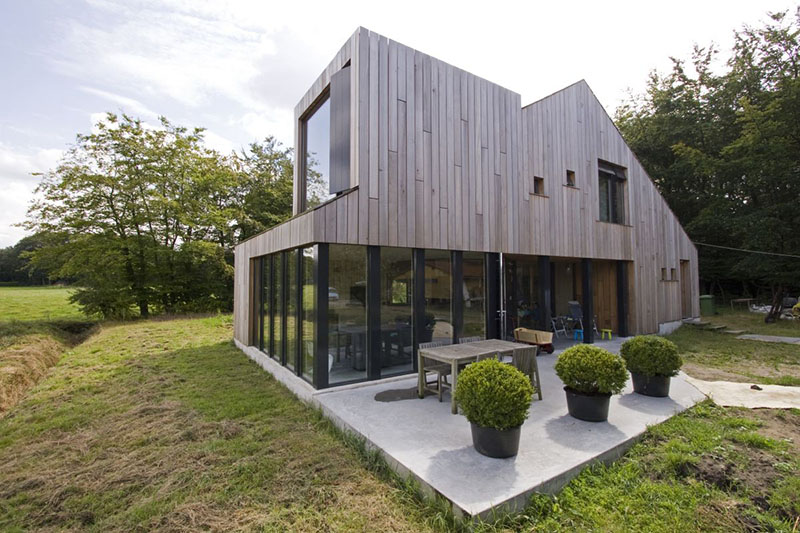 The grounds are wedged between a wooded parcel to the south and agricultural land to the north. The wooded parcel provides some soundproofing against the motorway in the vicinity, but also creates shadow. The house is optimally oriented to the surroundings. The main contour seems to harmonize with an environment that accommodates mainly saddleback-roofed houses and sheds. On the ground floor, the volume with the transverse roof appears to balance on two short legs. Between these two short legs, which contain the technical areas, the storage area and the entrance, there is a transparent interior oriented to the exterior, although it also maintains a relationship with the more introverted upper reaches by means of a void. The frame on the ground floor is formed by a row of balusters that interacts with the sprouting stems of the beech hedge. A splendid three-dimensional effect arises when viewing the surroundings from this vantage point. A large terrace adjoins the house just beyond the wood-shaded area on the west side. The first floor has a more secluded character in order to resist the warmth from outside. The bedrooms and other spaces have a window bordering on an alcove. Only the main bedroom has a large window on the north side. The simple saddleback roof volume blends with the four chimneys on the roof. The chimneys are used as channels for the hearth, but also allow light and space to the interior. 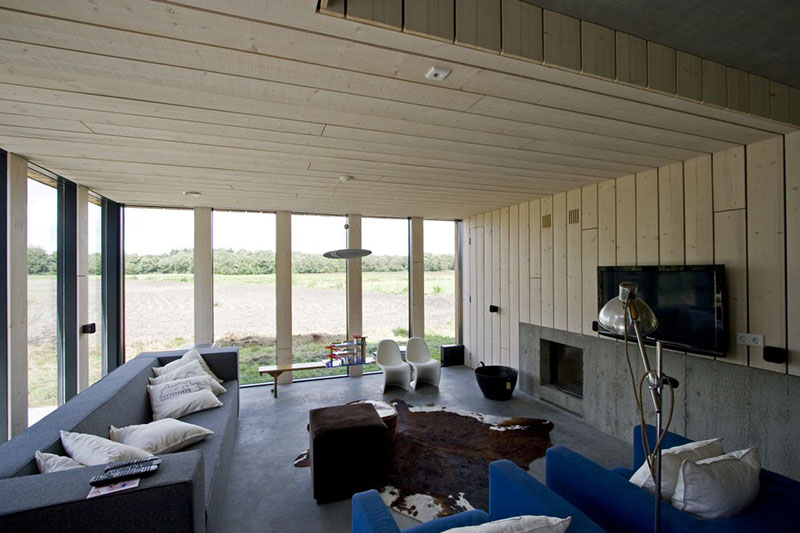 The plank played an important role as the smallest element in the development of the house. Planks were used to make the shuttering into which concrete was poured. This concrete then acquired the imprint of the planks. The same planks were also used for the façade, for the finishing of the roof, and for the interior walls. The surface was made coarser or smoother as required. The interior walls are coarse, but various types of finishing are applied. Sanding can smoothen the surface and restore the original colour to wood that becomes greyed. The hearth, kitchen block, staircase, toilet, bath, etc. are all realized to correspond with a plank width of 20 cm.” 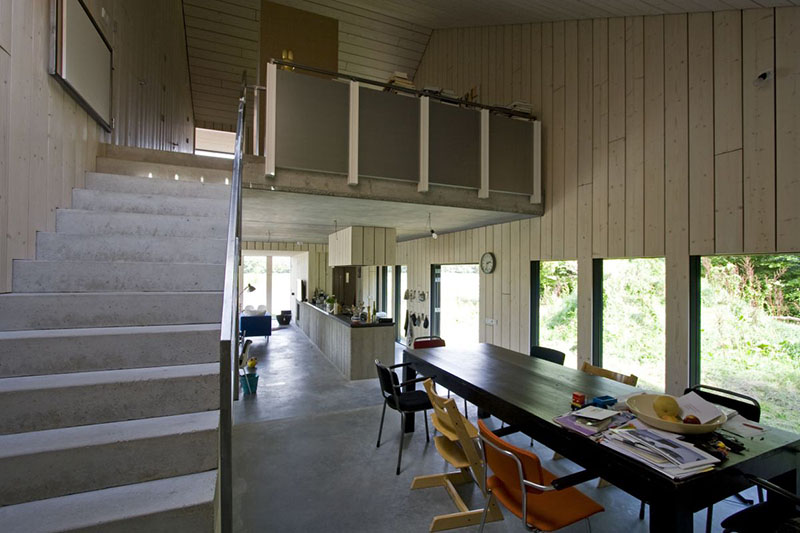 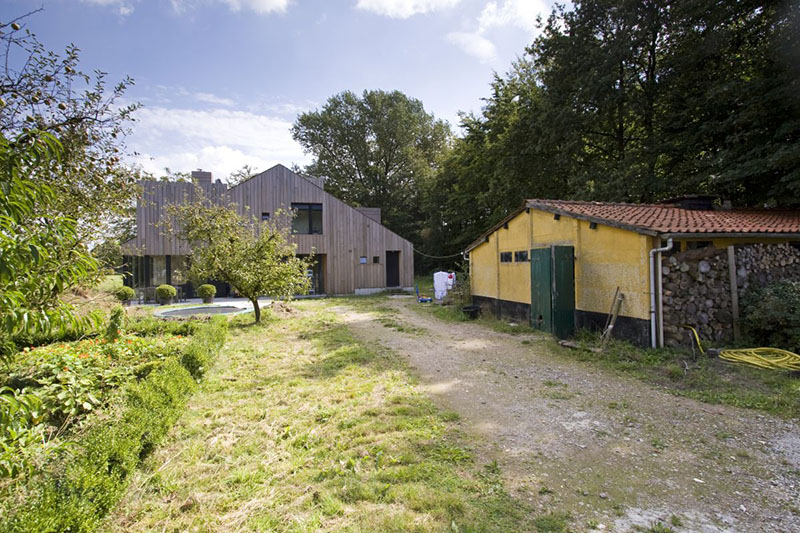 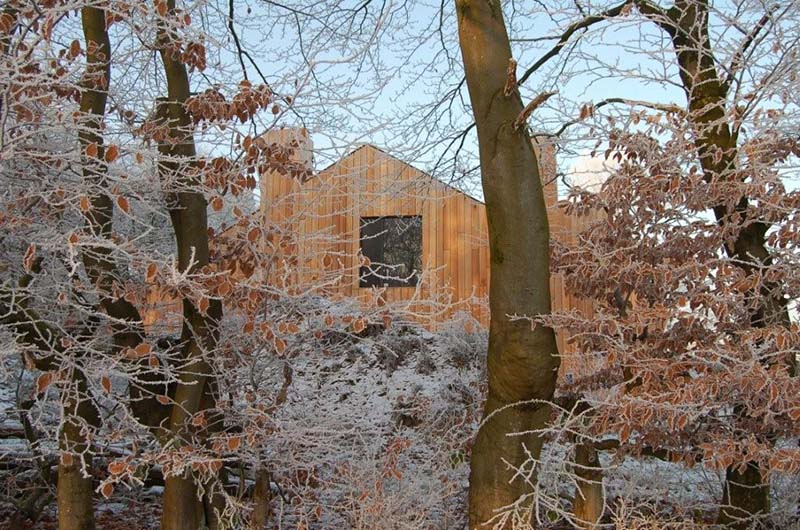