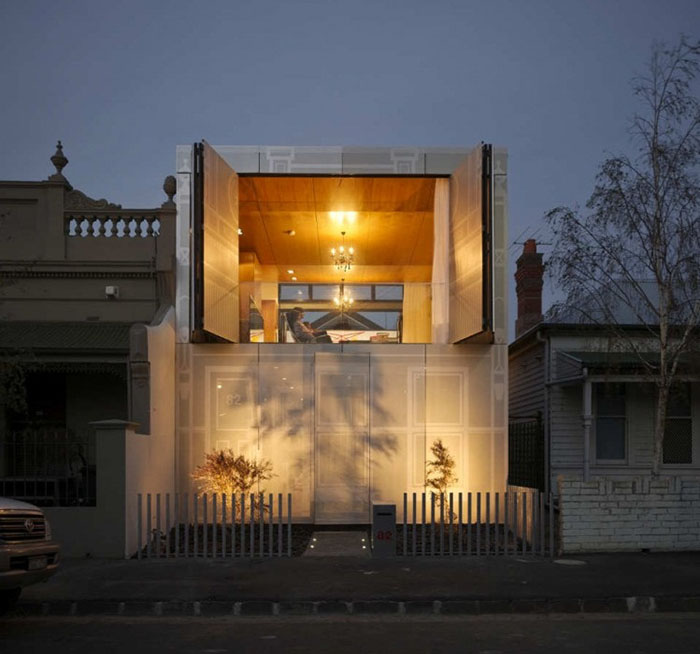 Australian firm Kavellaris Urban Design has created Perforated House in Brunswick, Victoria. Follwing is some description from the designer, “To us, this project is a platform to establish a critical dialogue within our built environment; to raise questions as much as to find solutions. The project is a critique on our cultural attitudes and how we determine them, on what we consider to be of heritage significance and how to narrate such ideas in a critical and contemporary manner. 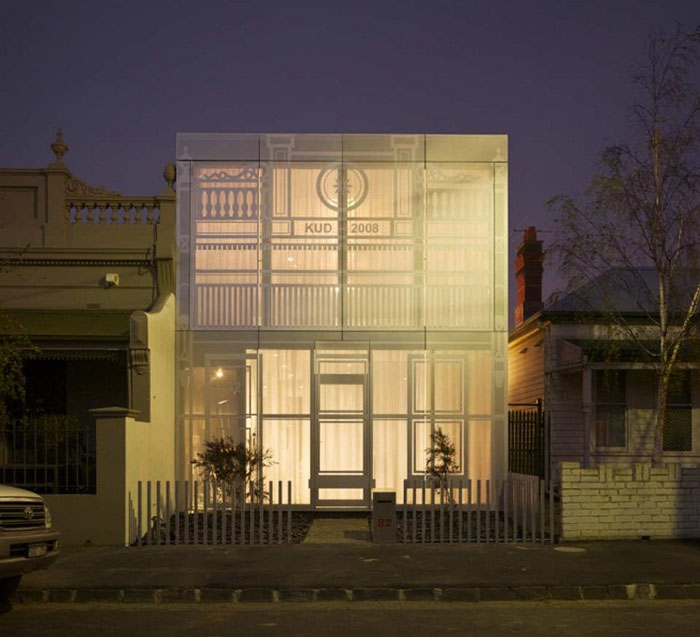 Is the symbolism and the idea more important than the architectural consequence? We challenge the idea that small inner city blocks cannot respond to complex contextual constraints such as orientation, sustainability, urban planning controls and heritage restrictions. Instead of negotiating with these so called ‘constraints’, we utilise them as areas of possibility and exploration in our design process and discourse. 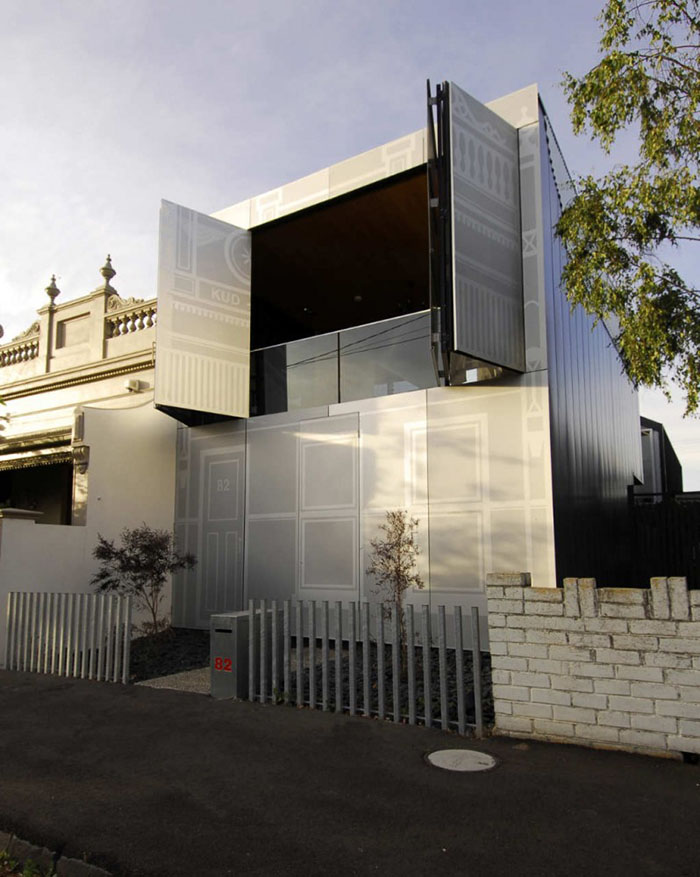 This once vacant site is nestled between the eastern bookend of a row of single fronted Victorian terraces and a double fronted Edwardian weatherboard house. Our strategy is part of our ongoing research to critique and respond to the Terrace typology. We concluded that this demand and attraction of such a housing model has a stronger link with romanticized nostalgia rather than of good design with the emphasis residing on the symbolism of the ornamental facade which dictates “the neighborhood character” rather than responding to it. 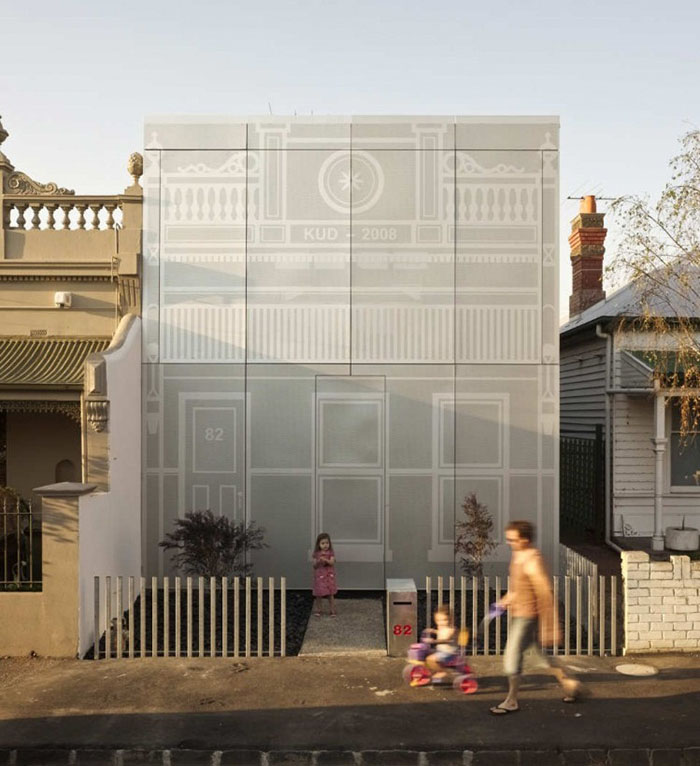 Our strategy was to break down the terrace house elements, critique, and form a response these elements. Particularly, the terrace house’s inability to address solar orientation; the poor linear program, constantly remodeled with predictable, repetitive and limited planning to achieve some sort of link between the active habitable space and the external private open space and the lack of natural light and ventilation within the house. 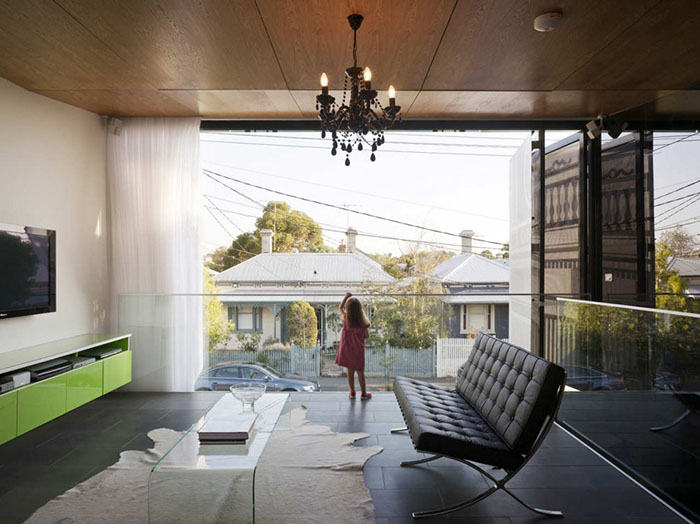 The main areas of investigation were Symbolism and Ornamentation, the Public and Private realm and redefining its boundaries, environmental sustainability, particularly solar orientation, and the programming of the plan.

The built form is essentially an urban infill within a very small 5.5×14.4m envelope. The perforated house is our proposal to establish an alternative language of our cultural attitudes towards critical questions of identity and heritage. We were interested in retaining the ‘idea’ and the ‘symbolism’ of the terrace but elevating the gesture to an ironic, even satirical, level to incite a public debate. The irony being that only in the absence of matter, through perforation, rather than through a physical reproduction of a terrace house, is the symbol of a terrace house apparent. 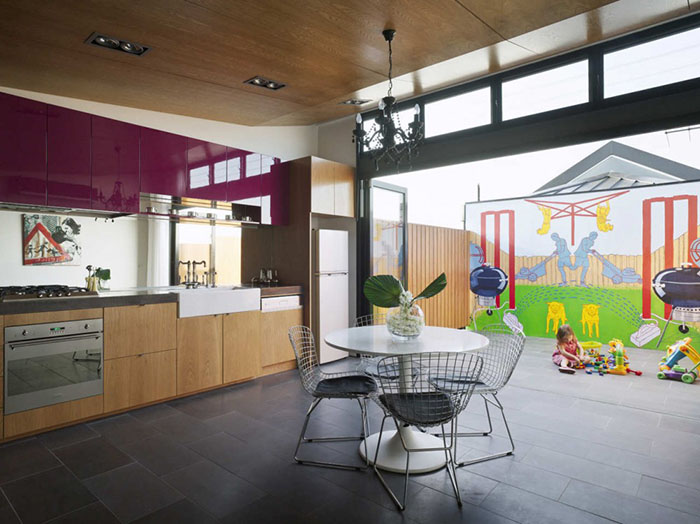 We wanted the house to be more than just a façade. More than just a message or a graphic stuck to a building. Our building is not an urban canvas paying tribute to Venturi’s “decorated shed”. Instead, the external facade can also be experienced internally, as it is a multi-functional device that constantly transforms the building from solid to void, from private to public and from opaque to translucent. By day, the building is heavy and reflective but by night inverts to a soft, translucent, permeable light box. The operable wall, or the absence of the façade, enabled us to critique the idea that houses are static. 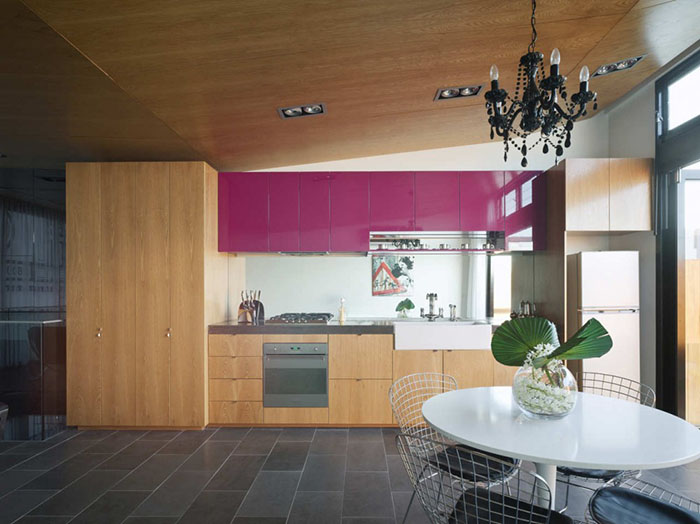 The use of operable walls, doors, curtains and glass walls enables the occupants to control the experience and environment. This architectural manipulation of space allows a blurring of the boundaries between inside and outside and public and private realms. The manipulated spaces overlap and borrow the amenity and context of the surrounding environment. 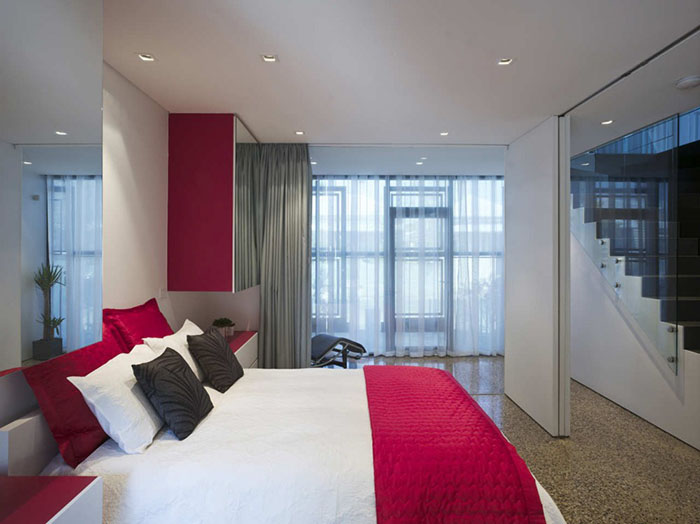 The plan inverts the traditional terrace program with the active living zones on the first floor opening onto a north facing terrace, thereby generating a primarily northern orientation to a south facing block. The perforated house incorporates passive sustainable interventions such as northern oriented glass bi-fold doors and louvers for cross ventilation as the primary means of cooling. In addition, solar hot water and 5-star rated sanitary fixtures are incorporated. 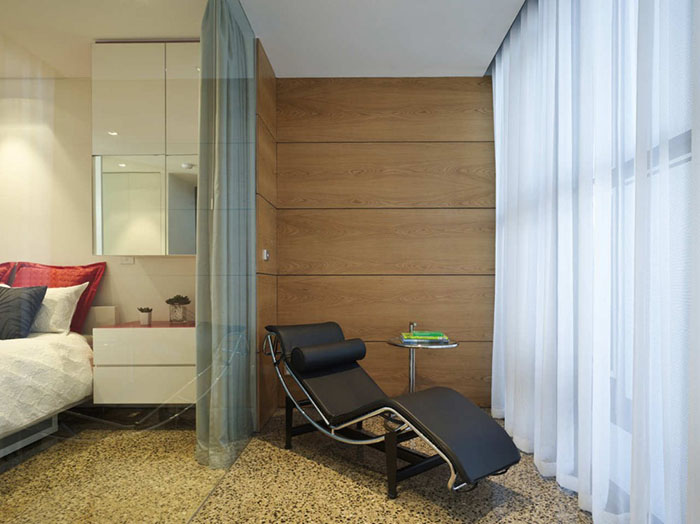 Reinforced by the childlike mural reminiscent of a past era, the north facing terrace redefines the “Aussie” backyard, and forms a commentary on the changing demography of the family unit and, ultimately, the typology of the inner city house.” 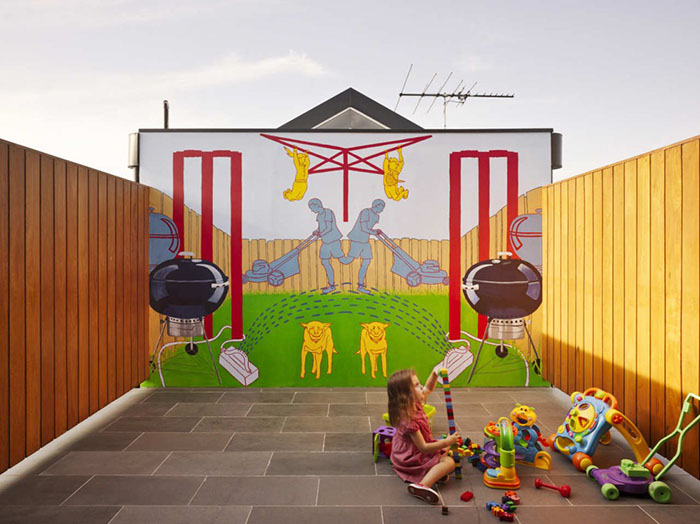