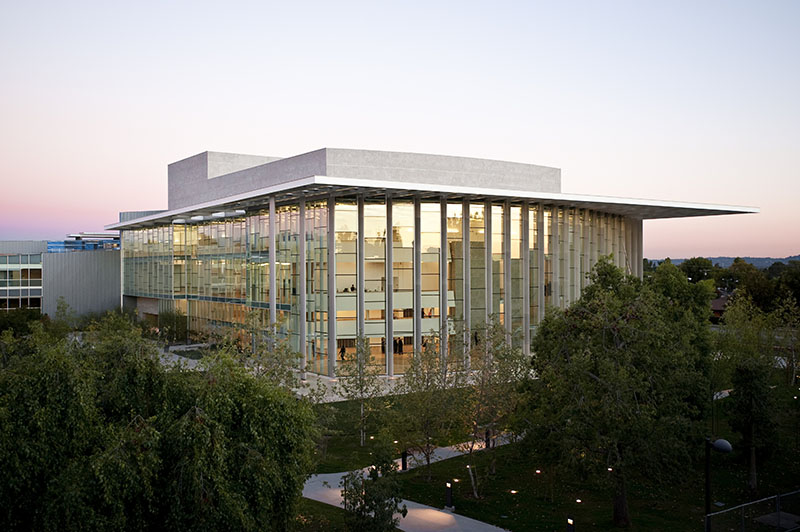 HGA Architects and Engineers have designed Valley Performing Arts Center (VPAC) on the campus of California State University, Northridge in an area of 166,000 square feet. This new creation by the HGA sets a new standard for world-class live performing arts centers and separates itself as one of the top three arts venues in Southern California and the new crown jewel of cultural entertainment in the San Fernando Valley. 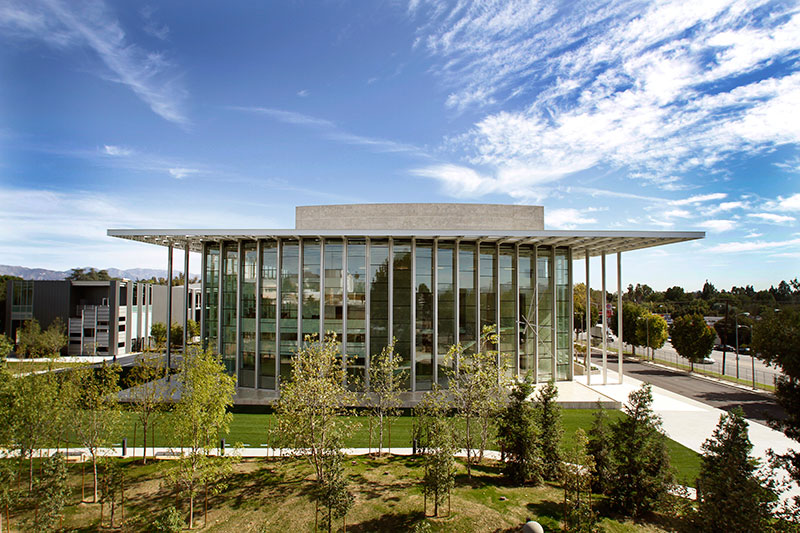 Following is some information provided by the designer, “Designed to exceed LEED Silver certifications, VPAC stands prominently on the easily accessible southwest corner of the CSUN campus and raises the bar for future design of performing arts facilities. Blending state-of-the-art technology and creative design with sustainability and engineering innovation, HGA’s design team balanced seemingly contradictory goals while staying within the university’s budget and delivering on a high-profile project that was decades in the making. By meeting these goals and creating a venue that can easily accommodate orchestra, opera, Broadway, film and dance, HGA delivered a cultural landmark highlighted by a sculpted stone wall, a dramatic glass-wall lobby and a grand 1,700-seat concert hall with state-of-the-art variable-acoustic tuning. 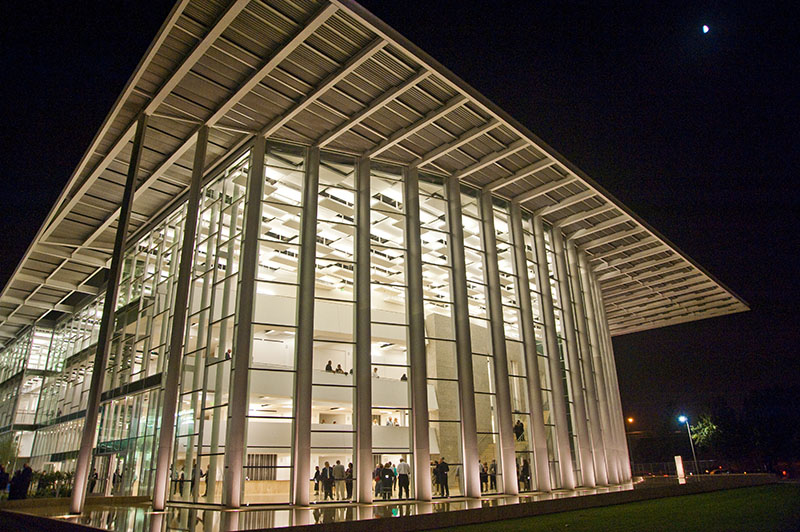 VPAC is comprised of two connected buildings forming one U-shaped, multi-use building wrapped around a central exterior courtyard. For the building containing the main concert hall, HGA created a spacious lobby that visually opens VPAC’s interior to the surrounding neighborhood. Travertine, stone tile and glass embrace the lobby as a grand staircase sweeps upward two levels to the first balcony. A second set of stairs leads up to the second balcony on the third level with its rooftop terrace. VPAC’s drop-off area is framed by the grand lobby, as well as an adjacent reflecting pond. 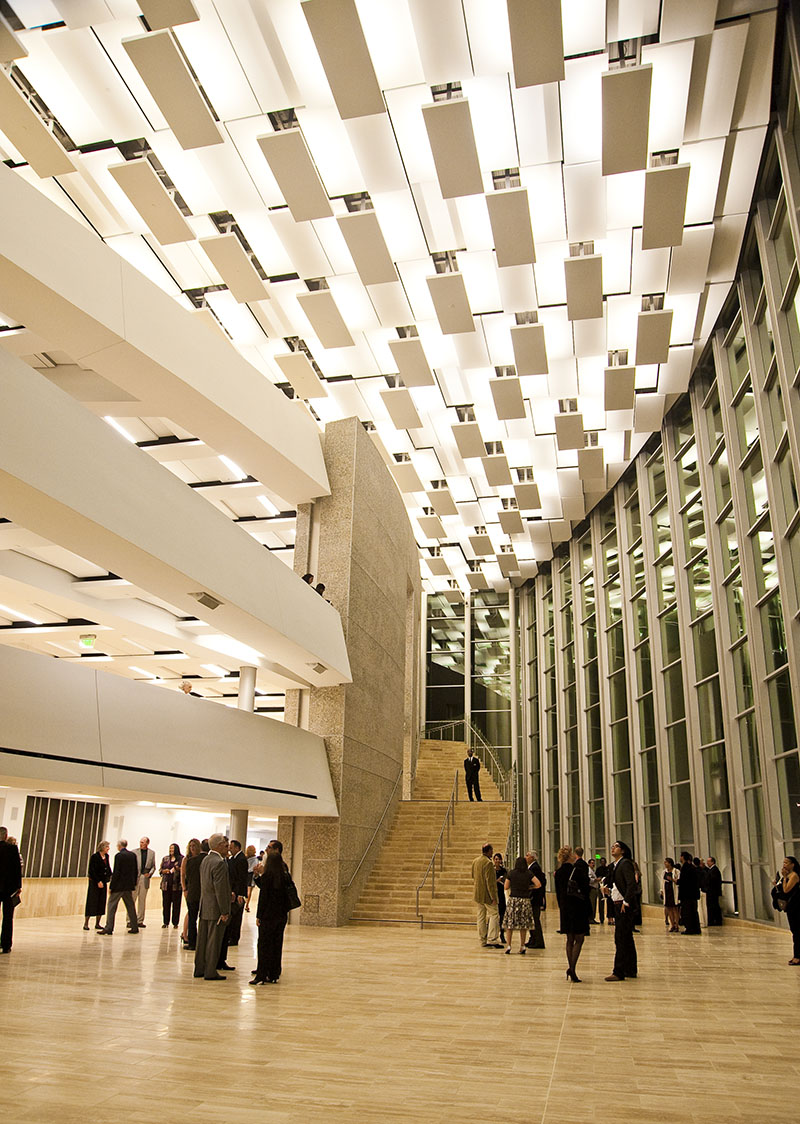 Inside the three-tier main concert hall, stainless-steel mesh panels along the sides and rear shimmer in pre-show light while patrons take their seats. Sinuous wood ribbons radiate from the stage, wrapping the balconies and walls in warm hues that seem to erase any boundary between the audience and the performers.

HGA, along with theatrical consultants Auerbach Pollock Friedlander and acoustical and audiovisual consultants McKay Conant Hoover, designed VPAC’s main concert hall to feature a spacious professional stage-house with an 85-foot-high full fly-tower that is equipped with a 60-line set rigging system, space at the back of the stage for orchestra shell tower storage, a hydraulic stage extension/pit lift and generous backstage maneuvering space. Also included is a 175-seat studio theatre (or, black box theatre), two large rehearsal rooms (one of which has the same dimension as VPAC’s main stage), academic and professional production support spaces, theatre-studio classrooms, a 230-seat lecture hall, and offices and facilities for the campus’ public radio station. Moveable screen walls are in place to hide exterior loading docks and other service functions, so the building shows no exposed service area. 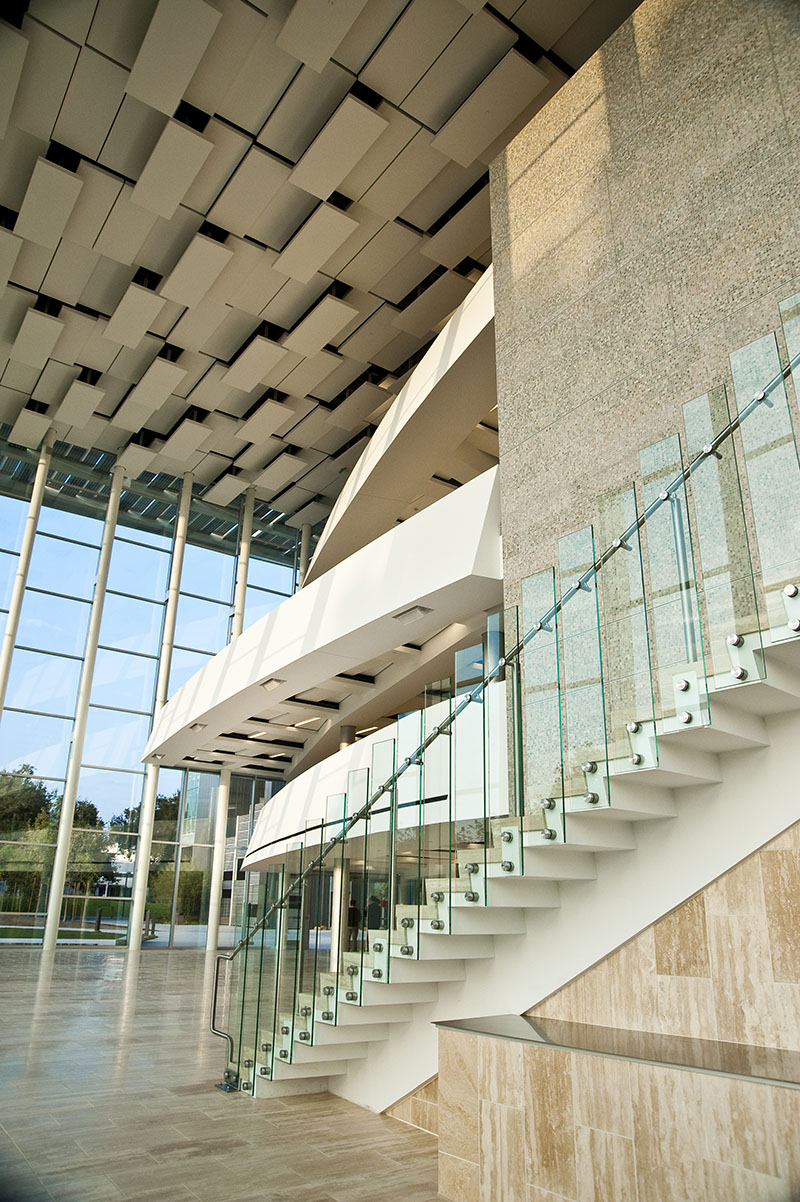 HGA’s design also incorporates a displacement ventilation system that uses the natural buoyancy of warm air to provide ventilation and comfort with air supplied from floor-mounted registers under audience seats. The system is more energy efficient and quieter than conventional overhead systems. Additionally, the choice to pursue sustainability greatly impacted the heating, ventilation and air conditioning (HVAC) system. Because of the acoustical properties of performance spaces, HVAC systems must be silent, requiring ductwork to be larger than normal.” 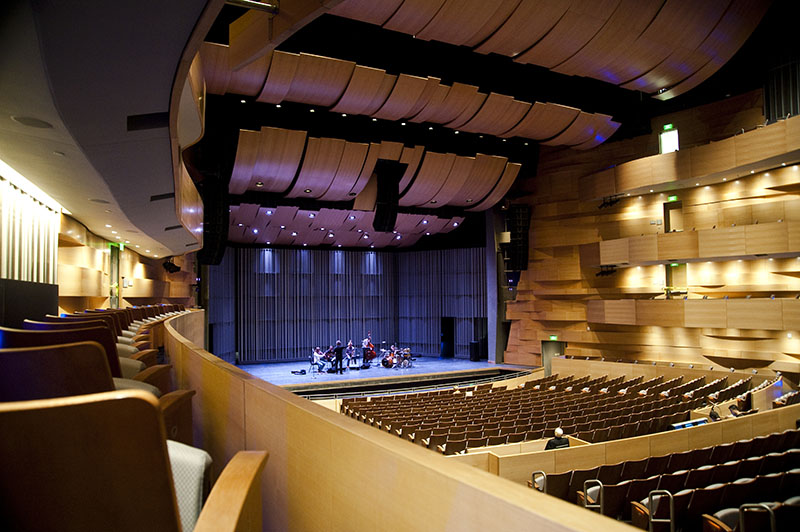