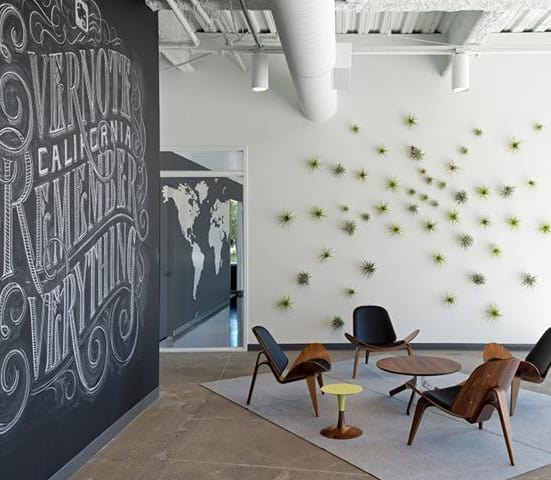 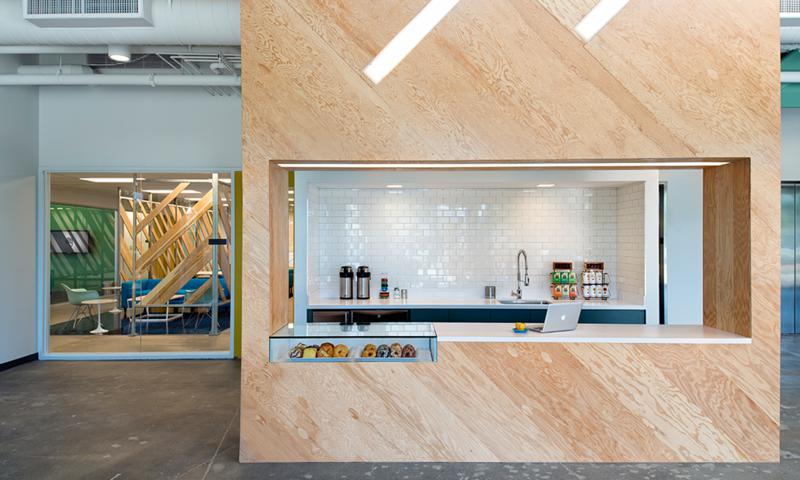 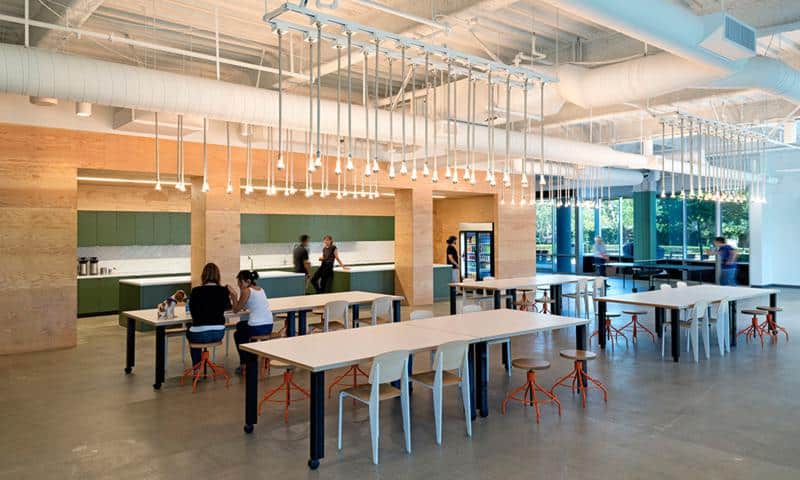 From the designers, “At Evernote the strict budget and swift pace of construction helped determine the direction of the design. We began with the concept of making the process of construction part of the aesthetic. In a clean and modern context construction materials may assume the design impact of richer finishes. Thus the cladding of Evernote’s coffee bar and break areas is done with Douglas fir plywood, the texture and grain of which provide their own graphic patterns. Similarly in lieu of expensive interior branding, Evernote hired chalk artist Dana Tanamachi to draft a wall-sized representation of the company’s identity, complete with tagline: “Remember Everything” and elephant (never forgets) logo. 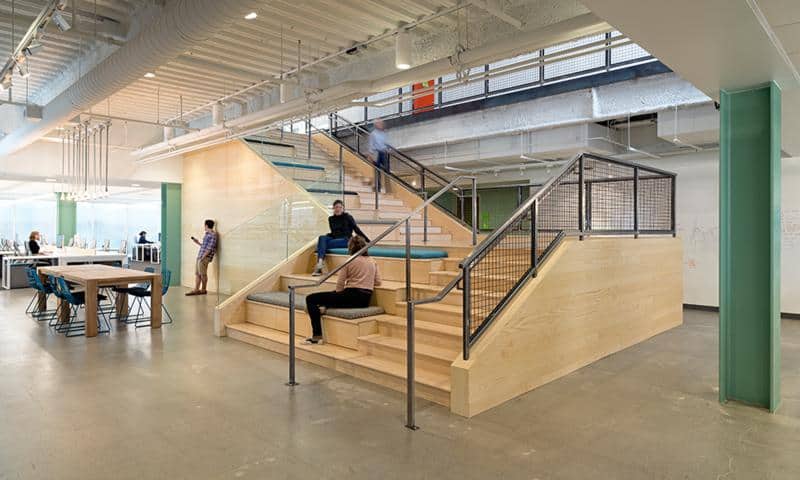 Adding to the informality is our placement of a coffee bar—with fully functioning donut and pastry counter—at the reception station. The theme is reprised in a white ash stairway that connects the fourth and fifth floors. Not merely a path from one level to another, the wide staircase is fitted with cushioned step seating to make it a natural gathering place and area for relaxation. There are similar spaces for breaks and informal meetings throughout the office—a large communal dining room, a designated fitness center, strategically placed snack and coffee counters. The cumulative result is an environment that promotes those casual interactions from which so many creative impulses spring. 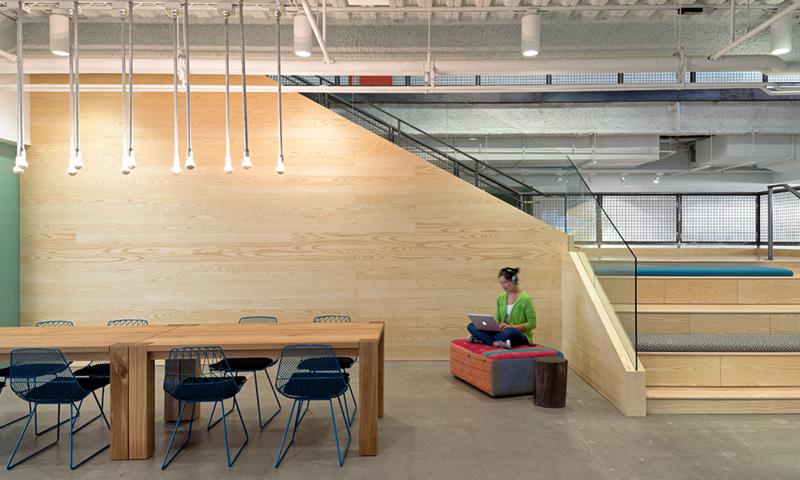 As befits a work environment attuned to informal collaboration, the finish palette for Evernote is light. White walls and pastel accents mix with blonde wood and lighting that enhances the natural brightness of the windows. A bank of enclosed conference rooms with eclectic furniture, white-board walls (and an origami elephant head) creates the kind of inviting environment that tech companies such as Evernote favor for spontaneous, two and three-person meetings. Small budgets and tight schedules are a constant in the design industry, but the lesson of this project is that those restrictions need not inhibit—and, in fact, often stimulate—creativity.” 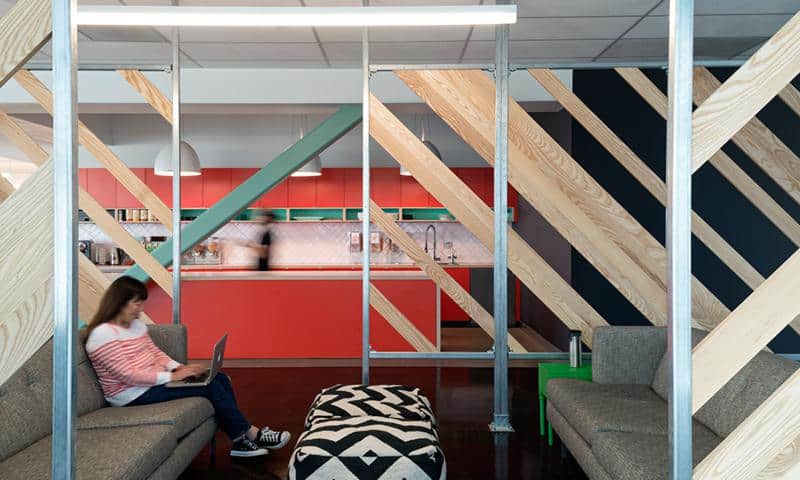 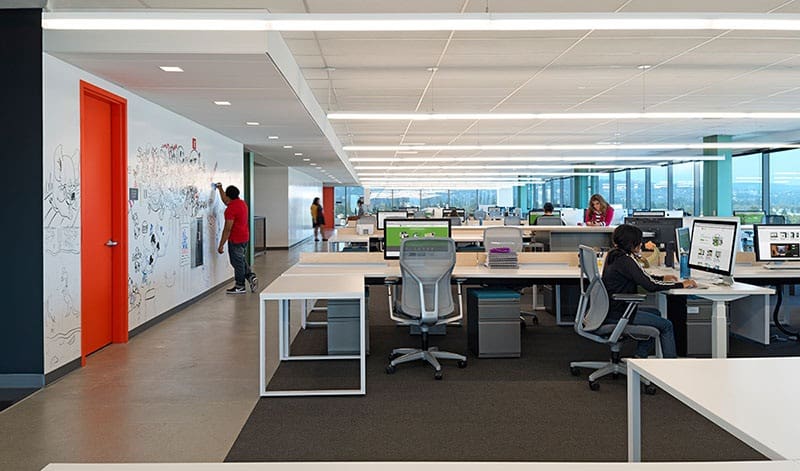 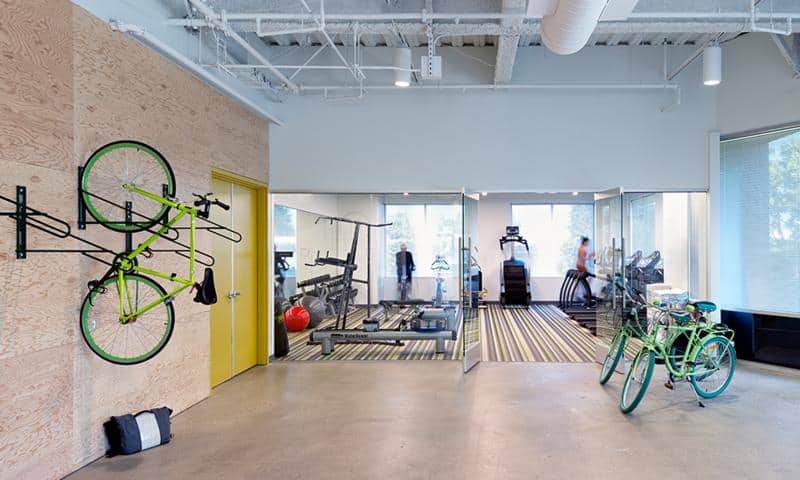 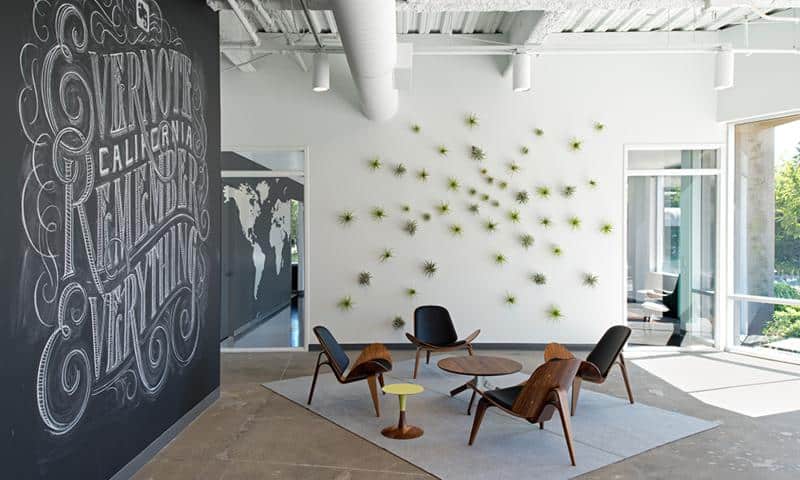 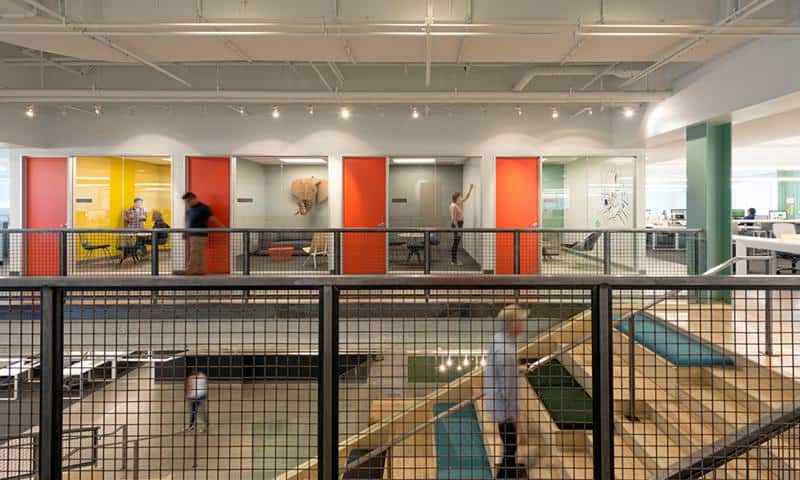 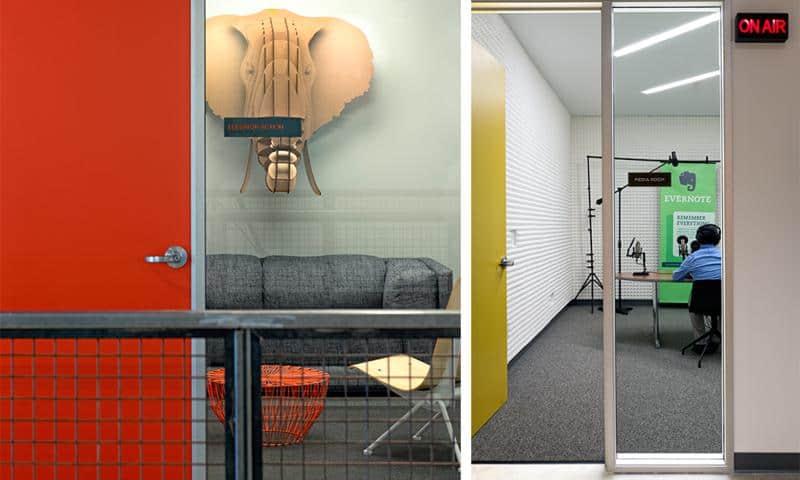 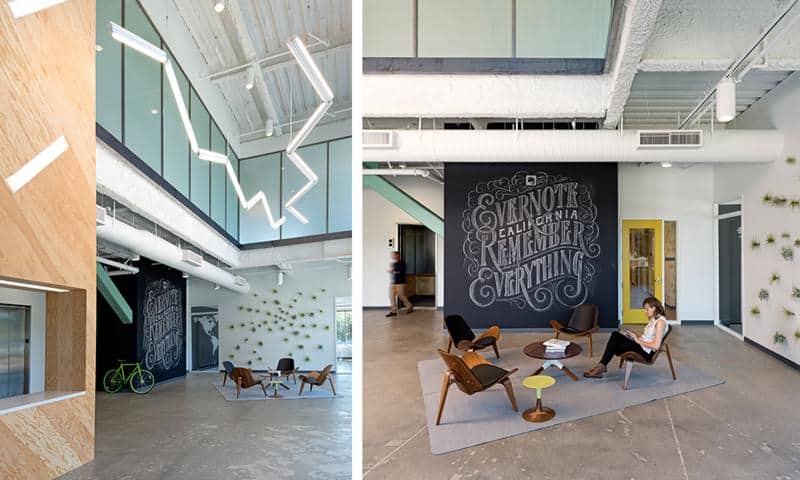 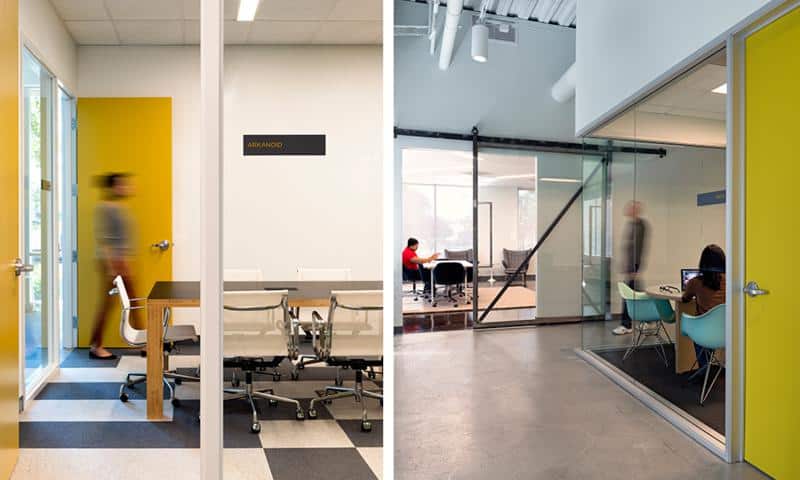 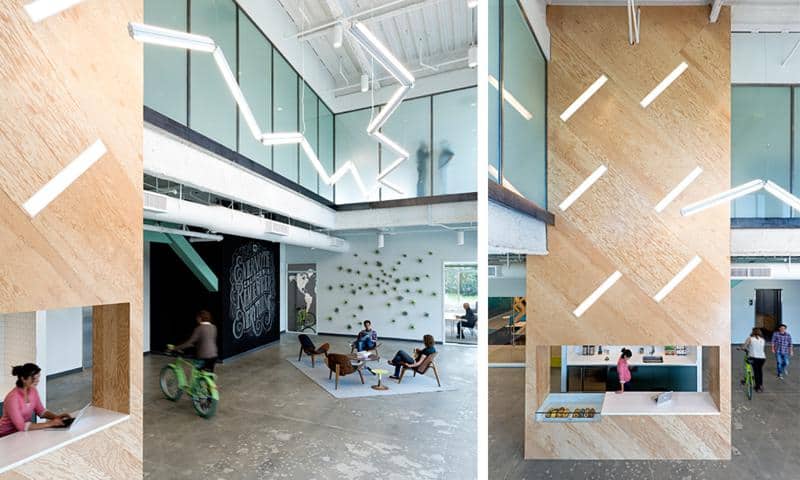 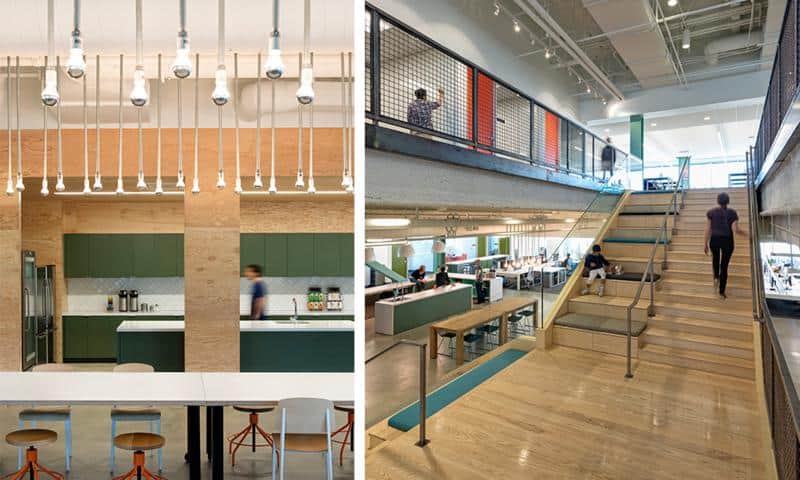